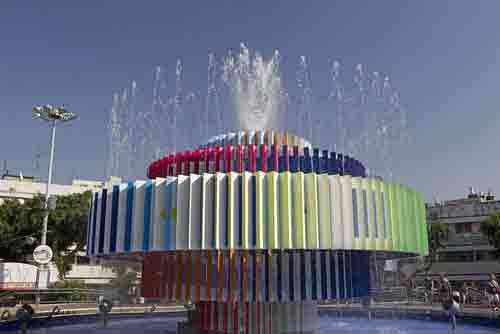 Researchers claim that fountains flowed into the annals of history more than four millennia ago. How many are there in Israel? It’s hard to determine since new ones are created all the time. And should a census include archaeological finds, ancient fountains that no longer function like the unearthing of the remains of a wealthy estate, with a mosaic fountain in its garden, dating back to the early 11th century? And then there are the temporary fountain installations like the water shows in the Port of Tel Aviv and the light-water projection at Ben Gurion Airport. What about a simple drinking fountain?

Fountains remain ubiquitous in a desert country that thrives on the free flow of this most basic elixir that sustains existence. Water is vital to life and fountains, a purveyor of this sacred commodity, also play a role in a country’s culture and art. Initially, fountains had a more practical purpose such as watering plants and animals. Additionally, many folk legends describe the magical healing properties of certain fountain sources. Take the enigmatic fountain of youth for example. As art appreciation grows, the fountain’s place in the canon of art and culture remains steady, stands the test of time and style consciousness.

A fountain can be defined as an architectural element which pours water into a basin or spurts it into the air to supply drinking water and said structure usually evinces a decorative or dramatic effect. Fountains were originally just a functional outlet for water stored in springs and transported via aqueducts and used to provide drinking and bathing water. At the close of the 19th century, fountains sustained a dramatic change. Prior to this time, most fountains were driven by gravitational forces, governed by varying heights.

As the 19th century came to a close, modem plumbing began to replace the functional precedence for fountains and they evolved, in the main, into purely decorative endeavors. Mechanical pumps replaced gravity and allowed fountains to recycle water and to force it to spurt to new, previously unheard of heights. The Jet d’Eau in Lake Geneva, built in 1951, shoots water 140 meters into the air. The strongest fountain currently extant in the world is the mechanism built in Saudi Arabia and known as King Fahd’s Fountain in Jeddah, which spouts water 260 meters high and uses the Red Sea as its receptacle.

Fountains have various uses today, almost all of which are decorative or making a statement in some way. They add an aquatic dimension to city parks and squares, as well as serve as a method to commemorate individuals or events. Fountains have also evolved into tourist attractions providing recreation and for entertainment.

A modern iteration of the fountain is called a  “splash pad” or “spray pool” and these are very prevalent and popular with children during the hot summer months. They allow for visitors and city residents to enter and play in the water, offering a brief respite from a hot summer day. Another modem fountain combines additional sense stimulation and the musical fountain combines cutting edge technology in conjunction with moving jets of water, colored lights and strong music to enhance the audience’s dramatic experience.

In Israel, fountains abound and are found all around the country. Here is a healthy sample of fountains that are worth visiting on your next trip to Israel. If you are traveling during the summer months, you can visit one of the grand scale water shows that take place at different points along the coast each season. However, there are permanent fountain exhibitions which are ready and always available for a quick visit.

There are an indeterminate number of fountains sprinkled across the cities and outlying areas, and these are the most popular ones. So get your selfie-stick and bus pass ready.

The largest fountain found in Israel is Eilat’s musical fountain, opened in 2015 and spanning 1.5 kilometers and boasting a whopping 350 jet sprays augmented by 400 colored lights that dazzle visitors 4 nights a week in the early evening.

Jerusalem has several fountains but the Teddy Fountain is the most famous and also provides entertainment for both children and adults. There are other fountains that grace this majestic city and new ones continue to be developed.

Tel Aviv’s Fire and Water Fountain, steeped in controversy and currently located at Dizengoff Square, is slated to be torn down along with the multi-level square, and all will be transferred to a ground level square where a smaller version of Agam’s iconic, kinetic statue fountain will be rebuilt. Construction begins in a month, so go now to see the old, dilapidated version.

Beer Sheva is the home to the Globe Fountain. This is just one of 30 outdoor fountains extant in the city. Although there is a great deal of disagreement about which fountain is the best, residents praised Mayor Rubik Danilovich for launching his 2011 plan for implementing light and water shows, and he went on to build a new fountain every six months. The city offers visitors a self-guided water fountain walking tour which is recommended as an evening activity when the lights are brighter, and the temperatures cooler.

Ashdod has its musical fountain, and Rishon Lezion offers visitors a fine fountain known as the Leaders Garden Fountain. Netanya presents its many visitors with the Artistic Fountain in Independence Square. So contact Mazada Tours now and book a tour, and take in the lure and romance of Israel’s fountains.

myriam jaui
Previous post3 Birding Sights, 3 Countries, in 1 Tour
Next postTop 7 Must Have Travel Apps for Your Trip to the Middle East